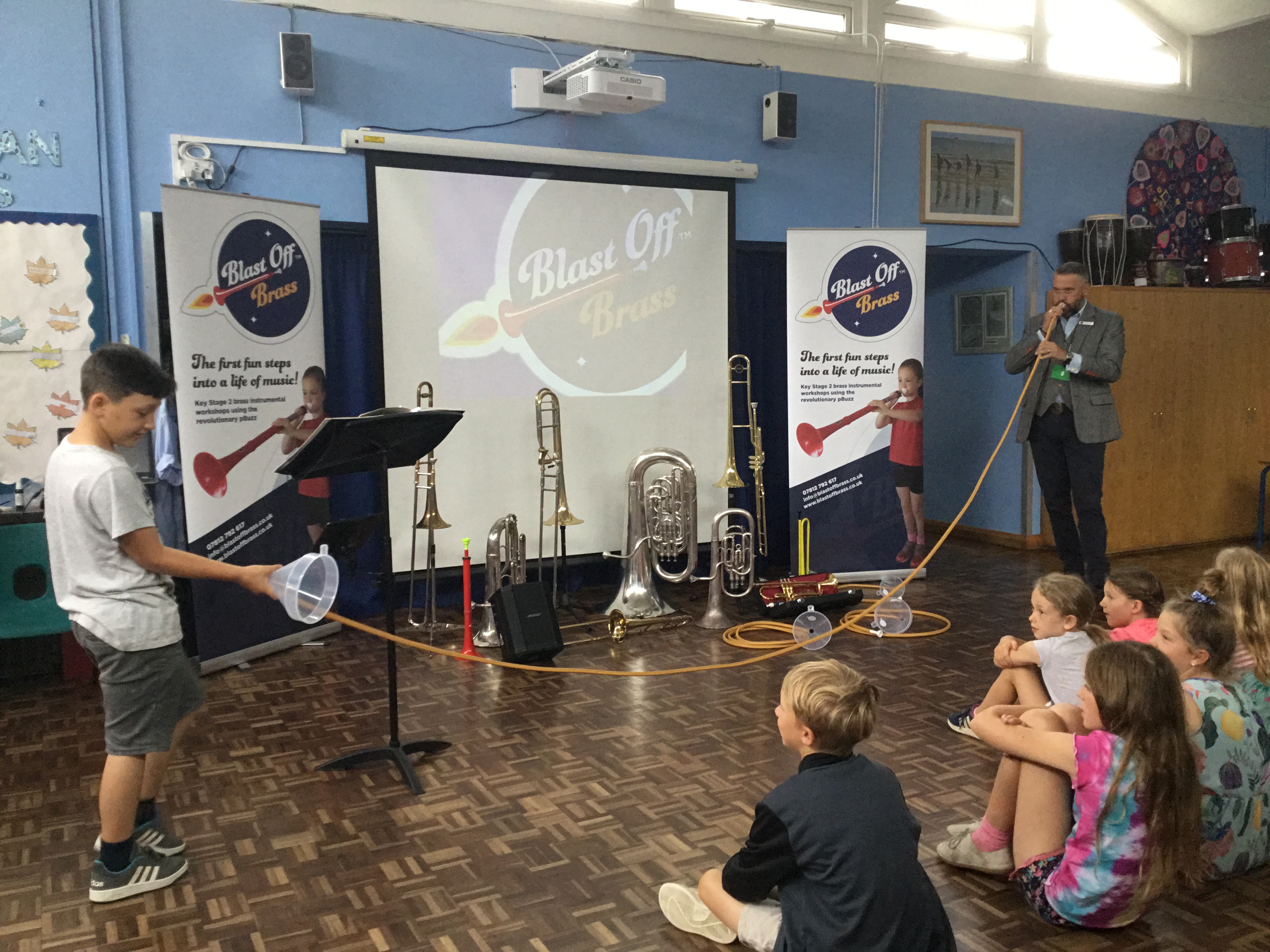 Over the last 25 years Richard Harvey has played trombone across the world; on Her Majesty’s Yacht Britannia, at Wembley Stadium and the Royal Albert Hall to name a few! Having appeared as a soloist, conductor, arranger and composer, Richard's passion is to give children the same opportunities to make music that he had. This has led to him founding ‘Blast Off™ Brass’, delivering inclusive and interactive pBuzz workshops to schools.

Richard shares with us how a recent workshop went at Stutton Primary School...

"Pulling into the car park of Stutton Primary School at 9am, I had that feeling that it was going to be a good day. I’d worked with some of these pupils before and, being a relatively small school, there is considerable scope to achieve significant progress. Mrs Janette Newbould, Key Stage 2 teacher, met me with a smile and a cup of tea, and I spent the next 40 minutes or so setting up for my whole school assembly; a wide array of brass instruments, my ‘hosepipe horns’ and carrot trumpet all laid out for the children to see, not to mention my plethora of bright red pBuzzes.

The assembly started at 10am, and the children really engaged with my demonstrations of the instruments, asking relevant and intelligent questions about a whole manner of music related matters. As usual, the highlight seemed to be when I played ‘Ode to Joy’ on a carrot, particularly when I took a bite out of it to demonstrate how the length of an instrument affects its pitch!

After a brief break we started Workshop 1, where we talked about breathing and posture before getting stuck in with the pBuzzes. Some of the pupils who had taken part in my workshops previously seemed to pick up on what they had learnt before instantly, which was great to see, and this allowed me to incorporate some differentiation into the session to stretch and challenge them.

Following what was almost certainly the nicest school dinner I have had since about 1978, we commenced Workshop 2. This is geared towards the final performance and uses my multi-tracked backing track to James Brown’s I Got You (I Feel Good). The pupils were doing so well that we also added some choreographed dancing and extra notes, using F and G as well as the Bb and A.

At 2.40pm a steady stream of parents flowed in and took their seats for the inaugural performance by ‘Stutton Brass Superstars’, which the children had very democratically decided upon as their monicker earlier in the day. After a brief explanation of what we had been doing during the day, the pupils demonstrated the knowledge they had gained by answering an array of questions I put to them on the spot. It was then time for the finale, and the performance of the piece. The Stutton Brass Superstars peaked at exactly the right point, absolutely nailing it in front of a crowd of beaming parents – they really did themselves proud!

All in all a very enjoyable and rewarding day for all involved."

For more information on Blast off Brass please visit the Blast Off Brass website.

You may also like recent blogs such as Pennthorpe School gets the Buzz or Why music matters in schools.