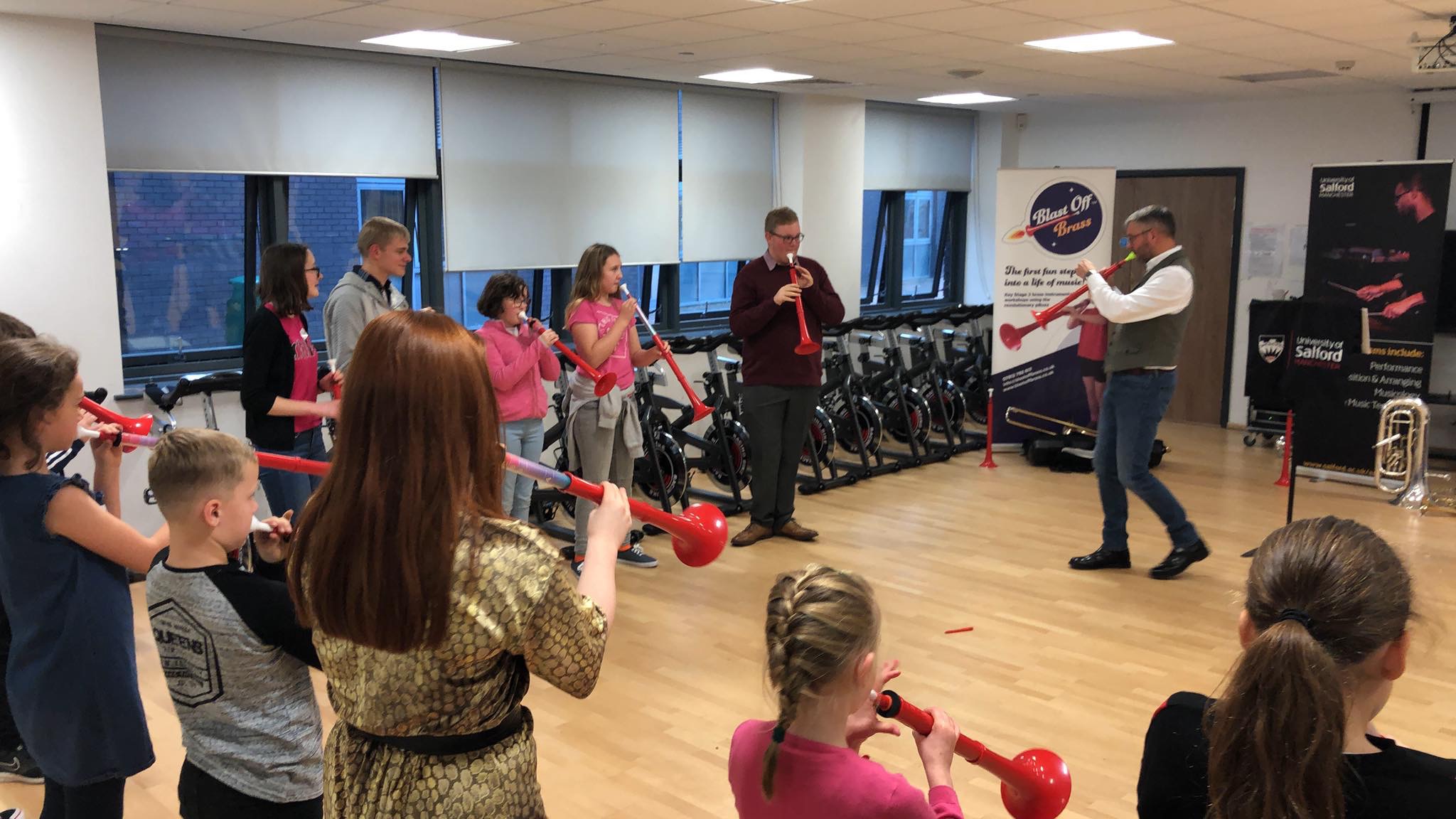 On November the 24th, young trombone players and students from around the country came together to be part of an extraordinary event where they enjoyed a whole fun-packed day of everything trombone! The British Trombone Society Youth Day in Bridgend included a variety of activities and workshops, one of which was led by Rich Harvey from Blast off Brass, who shares with us how the day went...

Setting off from Suffolk at 7am on Sunday 24 November with a trailer loaded up with a variety of brass instruments, pBuzzes and pBone minis, the sat nav cheerfully informed me that I would be arriving in Bridgend, Wales, at around 12pm for the British Trombone Society’s Youth Trombone Day.

This day, aimed at young players from beginner to grade 8 standard would feature a members of professional orchestras, including Roger Cutts, Principal Trombone of the Welsh National Opera, as well as students from the Royal Northern College of Music, the Royal Welsh College of Music and Drama and musical arts students from the University of Salford.  My role would be to run a beginner brass workshop with the aim of giving the youngsters their first taste of stardom in the concert planned for the end of the day.

Arriving at the venue, (Coles Cymunedol Y Dderwen - thankfully I didn’t have to stop and ask for directions), I was greeted by the beamingly energetic Jo Bartley, the regional representative for the BTS in Wales.  I could immediately tell from Jo’s enthusiasm that it was going to be a great day, and my anticipation was reinforced when I entered the building and saw the sheer numbers of young trombonists that were there.

I quickly got set up and was introduced to my group of 20 youngsters who were about to become the Bridgend pBuzz Orchestra.  As a music lecturer at the University of Salford, I was able to bring down four of my musical arts brass players, and they all got stuck in, passing on invaluable help and advice, as well as having their own first experience of the revolutionary pBuzz, which they all seemed to enjoy immensely!

I structured the day slightly differently to my school workshops, as there was less of a requirement to cover the national curriculum aspects, and so we concentrated on preparing as polished a performance as we could.  We were due to perform after the massed trombones, and so I knew the pBuzzers would be nervous, and I wanted them to do themselves proud.

At 4pm we took our place on the stage in front of a healthy audience of friends, parents and fellow brass players, and after a brief introduction the Bridgend pBuzz Orchestra sprang into life with their prepared piece.  As ever, the enthusiasm and hard work paid off, and the look of joy on their faces after they had performed will always make this a hugely worthwhile and rewarding experience for me.

I would like to thank everyone at WMG for their continued help and support, Jo and her team at the BTS, my students from the University of Salford and, most importantly, the members of the newly formed Bridgend pBuzz Orchestra - who said brass playing is a dying art?

You may also like blogs such as Pennthorpe School gets the Buzz or Why music matters in schools.