The past few months have seen the world of music turned on its head, and higher education has not escaped the wrath of COVID-19. Back in March, a week before the announcement of the first UK lockdown, the University of Salford took the decision to close the campus, send students home and finish the academic year off via the wonders of Teams and Zoom… other tech companies enjoying rocketing share prices are available.

Having to step back from the full brass and wind bands to accommodate the new Coronavirus protocols, we have developed a new small ensemble programme, focussing on music such as the Holst and Vaughan Williams suites, Mozart and Richard Strauss serenades and new works written especially for the ‘new norm’. One such piece, ‘Storm Cone’, by Lucy Pankhurst, is due to be recorded by the all-new Peel Brass Ensemble at the end of November, and we are extremely proud that we are still able to offer our students meaningful, challenging and fulfilling musical opportunities, despite being in the midst of a global crisis. 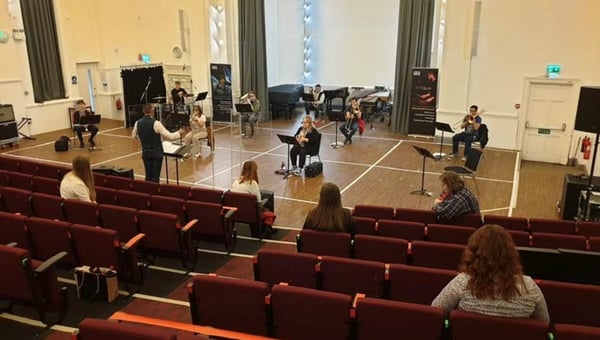 We also pride ourselves on the fact that every student has the opportunity to study conducting from their first year, and we are running a very successful module which sees the student conductors having around 45 minutes each week with two pianists. They are currently working hard on ‘The Planets’ suite, which was originally written for two pianos by the composer prior to the creation of the orchestral score. The performance classes are running relatively unscathed, and they involve the students working closely with an accompanist under the watchful eyes of their socially-distanced contemporaries; their first solo recitals are scheduled to take place at the beginning of December, albeit behind closed doors.

COVID-19 has made us all re-evaluate much of what we do, and in many ways this has been a positive, perhaps long-overdue experience; a chance to take a step back and look at what we are doing, and ask; “is this relevant to music in the Twenty-First Century?” The University of Salford’s degree programmes always have and always will focus heavily on future employability, and it is widely accepted that future pandemics are highly likely; one prediction is that we can realistically expect one every decade. We want to give the students the tools they need to flourish as musicians throughout their lives, so rather than shut up shop, hunker down and wait for the storm to blow over, the staff and students at the University of Salford have pulled on their wellies and raincoats and headed out into the deluge – after all, skin is waterproof.

Lecturer in Music at the University of Salford

Founding Owner of Blast Off Brass