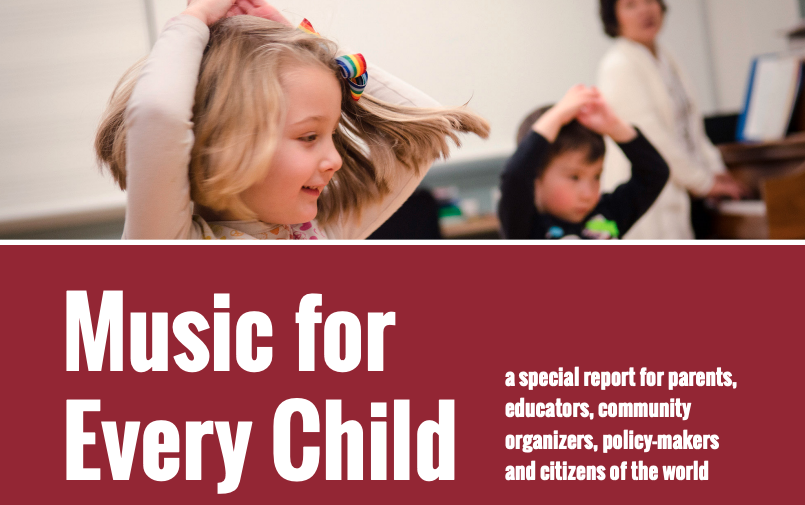 The San Francisco Conservatory of Music (SFCM) has announced “the publication of a groundbreaking white paper on the extraordinary impact of music education on child development.” Titled Music for Every Child, the white paper was written by Indre Viskontas, a neuroscientist who’s also a soprano with a master’s degree in vocal performance from SFCM, where she’s been teaching.

Combining a passion for music with scientific curiosity, Indre Viskontas is affectionately known as Dr. Dre by students at the San Francisco Conservatory of Music where she is pioneering the application of neuroscience to music training at the University of San Francisco where she teaches neuroscience. She holds a Bachelor of Science in Psychology from the University of Toronto, a Master of Music in Voice Performance from the San Francisco Conservatory of Music, and a Doctor of Philosophy in Cognitive Neuroscience from UCLA.

Music for Every Child: a special report for parents, educators, community organizers, policy-makers and citizens of the world, aggregates existing research to codify and clarify the precise impacts music education has on developing minds, from improving skills like planning and following instructions to building stronger neuroplasticity and providing a quantifiably significant incentive for children at risk for dropping out to remain in school.

pCornet – It could be a better choice for your students

Why we say pInstruments are Authentic

STEM and the pBuzz Lab