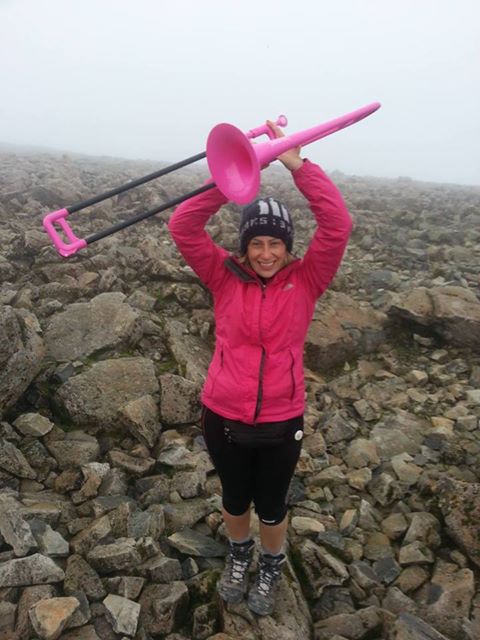 If you had told me a year ago that this bank holiday weekend I would have just completed the Three Peaks Challenge, I would have laughed - nervously probably, because I didn't even know what it was! However that is what has just happened. I took part in a group of 30 musicians, a brass band, and climbed Ben Nevis, Scafell Pike and Snowdon, with instruments, and performed on all three peaks within 24 hours.

It was the crazy idea of James Parkinson, whose mum was diagnosed with MS 20 years ago and whose father had taken a band up Ben Nevis when he was a child. Living in Cambridgeshire, one of the flattest parts of the country, made training interesting, but those of us taking part from East London Brass, where James and I both are members, managed to take some trips up north to find a few hills.

I had a discussion with James about whether I could take just a pBone with me - alas he insisted I should be carrying a 'brass' instrument like everyone else. I couldn't help but feel this was the ideal place to take one so contacted pBone who kindly sent me a shiny pink one and gave a donation to the charity. I am very glad I did take it, as Ben Nevis with a 'real'  trombone was about all I could manage, so the pBone is what made it up all 3 with me!

It was the hardest thing I have ever done, and I think was tough for everyone at different times, but the group quickly became like a family and we all helped each other in their difficult moments. It has turned out to be a life changing event - 3 Peaks Brass is already looking out for a new challenge for next year, and most importantly we have raised almost £18,000 so far, with money still coming in, for the MS Society and their amazing work helping those with this awful disease.

If you would like to donate there is still time visit www.virginmoneygiving.com/3peaksbrass