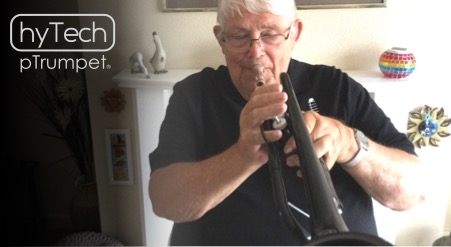 Recently Keith got in touch with us to share his hyTech experience, and how it has breathed new life into his brass playing career, read his story...

When 76-year old musician Keith Parker (pictured left) from Kingston-upon-Hull suffered a spinal injury, he thought it was the end of his brass-playing career.

Now, thanks to a new invention and the friendship of both his grandson and one of his friends, he has opened a new chapter to his musical journey.

For more than 60 years Keith played trumpet with the greats: Gene Pitney, Motown singing group The Supremes, The Three Degrees and the Drifters - on a busy schedule of tours, shows and television. But his career as a professional trumpet player came to an abrupt halt when he suffered a spinal injury that resulted in urgent surgery - Overnight, he found he was unable to play his trumpet because of its weight.

“It was devastating, but I count myself lucky that I survived. However, I thought my trumpet-playing days were over,” he said. Then Keith came across a revolutionary British invention that has become a worldwide success – a trumpet made of recyclable ABS plastic; a pTrumpet. “It opened up a new chapter for me. Being lighter than a traditional brass trumpet, I could easily hold it and it reinvigorated me.” 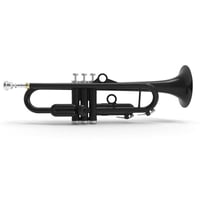 Keith encouraged his grandson Joe to play. Joe, 19, who has recently started at Leeds Becket University studying music production, had previously been in school orchestras and recently the East Riding Youth Jazz Orchestra.

So impressed was Keith, that he then bought a black pTrumpet hyTech – a hybrid trumpet still with the lightweight plastic body but with the addition of metal valves. “It’s unbelievable what a great instrument this is. So light and it blows really great!”

So then there were two of them playing together. Then tragedy struck when Joe’s best friend, Kiernan Roberts was involved in a near fatal hit and run incident suffering a fractured skull and broken neck when hit by a motorist who was more than two times over the legal drink-drive limit.

Kiernan, who was then a sixth-former student at South Hunsley School in Melton, underwent three life-saving operations. Despite that, Kiernan has embraced extensive rehabilitation to make the most of his life including music and brass-playing that have come to the rescue.

With the encouragement of best friend Joe, Kiernan (pictured front right with Joe) visited Gear4Music in York where he too came away with a hyTech. The lightweight instrument proved ideal for Kiernan who has found that it has also given him the opportunity to play.

Keith said “All through my life I have lived and breathed music. It’s a great leveller, a great way to bring people together and above all, great fun.

“I thought my days as a musician were over but British ingenuity has come to the rescue; I have just got back in my old bands again it has given me my life back. The fact that I have been able to introduce this to both my grandson and Kiernan makes me feel enormously proud; that this has also helped a young man who has suffered such trauma to his life, is a rare privilege,” he said.

Steven Greenall, Warwick Music Group's CEO says “When we set out to create the world’s first plastic trombone nearly ten years ago, we had no idea where that journey would take us!  Our driving desire is to make the joy of music accessible and fun by creating quality brass instruments. Keith’s moving story epitomises that - it’s fantastic to hear of different generations of musicians playing together, and the fact that hyTech has enabled them to do that is wonderful. We are all delighted and wish Keith, Joe and Kiernan many happy times together playing and enjoying music.”

What is the difference between a Yamaha YTR2330 vs HyTech?

What inspired us to create HyTech?