Many readers will already be familiar with or have played on plastic trumpets in the past. You may already have made up your mind on whether they are a force for good or evil in music education! My opinion has been that they are a bit of both.

In the correct environment, they can open up brass playing to students that perhaps otherwise would not have gone down that route. The well-designed pTrumpet (the original model, launched in 2014) fulfilled precisely this role, giving a robust, lightweight and fun option for children learning an instrument, particularly in a whole-class environment.

What the original model is not however, is a realistic alternative for a more serious student wanting to make a full and sonorous brass sound and be able to blend well with other ‘brass’ trumpets. 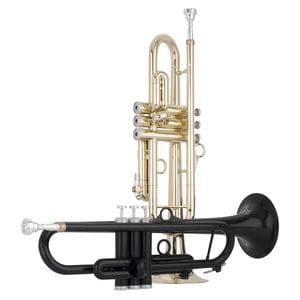 At the ITG Conference I had the opportunity to play on and review a couple of prototypes of the latest pTrumpet model: The pTrumpet hyTech. This is a completely redesigned plastic trumpet, that incorporates stainless steel valves inside a brass valve casing, as well as a brass mouthpiece receiver and mouthpiece. A hybrid horn if you will. This adds slightly more weight to the instrument than the original model, however still weighs in at only 650g.  The bell design is also totally new, with a very open bell-taper for a fuller and richer sound.  It is even coloured like a brass instrument, available in gold, silver or black.

A priority for any student instrument is valve-reliability. The pistons and casings here are well-made and run smoothly and effortlessly.  Even after a bit of rough treatment and lots of sideways motion as I was pressing the valves, they remained slick. Intonation is as solid as any brass student trumpet that I have played, but the feature that struck me most was the sheer depth of sound. It was nearly as full as it’s brass counterparts, with really good consistency of sound across the ranges. I heard younger student players trying these instruments and the sound was easy for them to produce, with a volume and depth of sound that is certainly lacking in other plastic instruments. 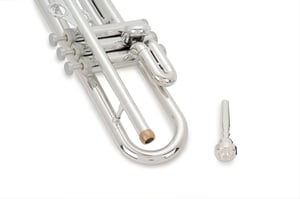 A number of fabulous players including Jens Lindemann and Bijon Watson picked them up too – you won’t be surprised to hear that they sounded incredible. Let’s face it, they would on anything!  However, everyone was equally as surprised as me at how easy these are to play, and what a satisfying and convincing sound they can help you to create.

This is a valuable addition to the current marketplace, combining the durability that plastic instruments bring, with a ‘real brass’ sound and playability.  I can see this working particularly well as a rental instrument as there is so little on it to go wrong!

Bag a bargain on Black Friday