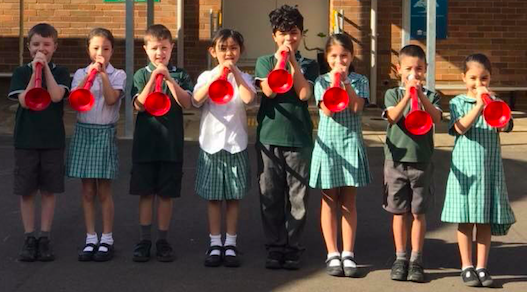 It has been a while since my last blog – I have had a few medical issues including a shoulder reconstruction – an arm in a sling makes pBuzz playing a little tricky!

The class I have been featuring up to now have been working towards playing all of the notes on the pBuzz. B flat and C were a challenge – and some children complained of the notes hurting their mouths.

However I felt they gave them a good shot.

We then worked our way up from F to C – this was more successful – as you can see, most of the children managed to prevent their cheeks from puffing out, and pitched pretty well.

Using the pBuzz resources on the whiteboard we played all five notes. The children enjoy playing along with the tracks, although as you can hear some of the pitching is a little sporadic.

Over the last couple of months I have formed a Junior instrumental group, and I did an arrangement for pBuzzes and Boomwhackers, to be played at our Open Day Assembly.

The children got a huge kick out of playing in front of an audience.

I recently had the pleasure of spending a day at a school in Western Sydney where I demonstrated pBuzzes to 120 children. We had a great day, and the music teacher has just put in an order for 35 pBuzzes and an extra 95 mouthpieces.

So if you are in a school in Sydney, feel free to contact me for a free demo!

Coronavirus; free resources for teachers
Why did we make the pBugle?

How do I teach a trombone lesson on Zoom?