pCornet stars at Up Helly Aa

Every year between the months of January and March, the residents of Shetland, the most northerly archipelago in the UK, celebrate the end of the long winter nights and the coming of spring in a way that only they know how: by holding large torchlit processions, and setting fire to Viking Long Ships. This is Up Helly Aa, Shetland’s famous fire festival, and this year, in the midst of it, some might say with a starring role, is a pCornet. Lauren Doughton, Solo Cornet with the Lerwick Brass Band, provides a behind the scenes look into what goes on.

For most brass bands, I imagine January is limited to sensible indoor concerts, with central heating, and nice things like that, but for the Lerwick Brass Band, January marks the beginning of our busiest outdoor marching season.

There are twelve Up Helly Aa or Fire Festivals in Shetland in total, and we play in eight of them. For those who are not familiar with the festivals this video explains it all.  The largest and most famous of them all is the Lerwick festival, which happens on the last Tuesday of January every year.

The festival is led by the Guizer Jarl and his Jarl squad (you can’t miss them, they’re dressed as Vikings and their shouts and roars can be heard all over the town as they travel from place to place throughout the day), and runs for over 24 hours. It starts with a daylight procession, as the Guizer Jarl and his squad make his way through the town, visiting care homes, hospitals, schools and other public places. Then it's on to the evening torchlit procession, and the burning of the galley, before the squad heads off to the halls (private parties, run by hosts and hostesses, who invite the guizers to come and entertain their guests for the night) to perform, dance, and, of course, eat, drink and be merry. Alongside the Jarl squad will be thousands of other guizers, each in their own squad, with unique costumes and acts, all carrying torches, and then heading out to party the night away. As well as being an outstanding visual spectacle, it's an amazing feat of logistics and organisation. 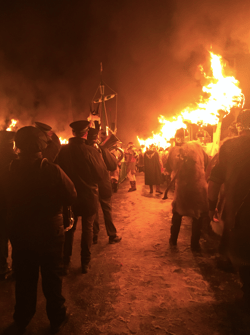 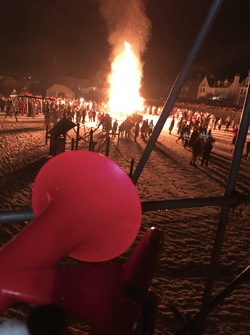 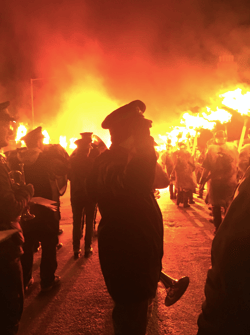 For the Lerwick Brass Band our Up Helly Aa involvement starts way back in December, while the squads are still planning their acts and building their suits, when the Guizer Jarl comes to us and requests his Ranks Tune. This is the tune which we will play for him as we march with him and his squad up the ranks of waiting guizers before the torchlit procession begins. Over the years these tunes have ranged from traditional marches such as ‘Our Director’ or ‘Erimus’, local folk tunes, such as ‘Mangaster Voe’, to the slightly more exotic, including ‘Brown Girl in the Ring’ The theme from ‘The A Team and ‘Gonna Fly Now’ from Rocky. 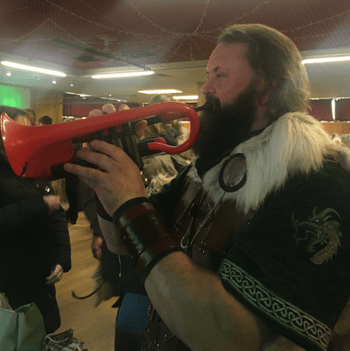 In mid January, in the run up to the festival the Jarl and his squad visit us at our band hut to hear their tune before the big day. We also get a visit from the ex Jarls and The Committee (to become Jarl you are elected onto the festivals organising committee, where you must serve for 15 years before taking up the mantle of Jarl, it’s a huge commitment!), and these informal social nights are one of the highlights of our festival.

After all the (indoor) preparation comes the big day itself. This is my eighth Up Helly Aa playing with Lerwick Brass Band (which means, factoring in the other 7 fire festivals we also play before spring that it’s roughly the 64th Up Helly Aa/Fire Festival I’ve played in), so it is by no means my first rodeo. If there’s one thing I’ve learned from each and every one of them, it’s that marching around outside, in January (or February, or March), with a lump of brass clutched between your hands and stuck to you lips can be really, really cold!

Several years ago a visiting band member coming to play Tuba with us for the festival arrived with a plastic mouthpiece. As I desperately tried to keep my instrument (and fingers and lips) warm I have to admit to eyeing it with envy, and thinking that he might have been on to a very good idea. When the pBone, and then pTrumpet came onto the scene, I began to wonder whether the plastic instrument was the answer to my chilly Up Helly Aa problems, and then when the pCornet came out it became a no brainer, and so this year I was keen to see how my new red plastic friend would cope. It’s fair to say I have not been disappointed!

To confess, this year’s Lerwick Up Helly Aa was not the first winter outdoor march that I’d taken the pCornet on - it has already been out for a trail run at the Christmas Lightup parade at the beginning of December, and then for Scalloway Fire Festival, the first in our fire festival calendar two weeks previously. I was already fairly confident it would perform, but with the number of bystanders and press about, and the increased attention that the festival brings, there was just a little more pressure (and quite a lot more playing) involved this time.

On Up Helly Aa morning our day starts at 9.30am, when we meet up with Jarl Squad for the morning procession. It being January, and this being Shetland, we’re used to encountering a little ‘weather’ during our marches, normally wind or rain. This year we were faced with snow.  We don’t generally get much snow here, and what we do get doesn’t normally stick, but this did coating the pavements and roads, and adding ‘staying upright’ to the list of challenges that already come with trying to play and move at the same time. So, with freezing wet stuff coming from the sky (in various forms, ranging from sleety wet, right through to hard little hail balls) we march off behind the Jarl Squad for the first of three processions of the day. 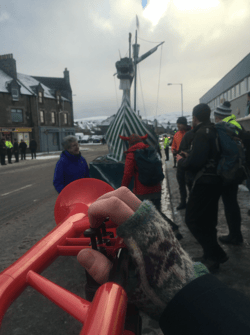 During the morning procession we stop at the Market Cross to play the Up Helly Aa tunes and then head off to the Bressay Ferry Slip, where the Galley will be parked up all day for people to view.  While at the Bressay slip we join up with the Pipe Band (made up of the Lerwick and Kirkwall Pipe Bands), who are also accompanying the Jarl Squad on their various rounds of the day, to play Highland Cathedral. This collaboration is one of the highlights of the day for us, the sound of the bands together is rather beautiful, and something a little unique. If I was worried that the sound of my plastic cornet might sound a bit ‘off’ or stick out in the midst of the rest of the band, by the time we’d finished this any fears I’d had were well and truly allayed.

Our next engagement comes at 5.30pm when we meet with the Junior Jarl Squad for the Junior procession (there are two parts to Lerwick Up Helly Aa, senior and junior, and we play for both), and head off to burn our first galley of the day.  Then it’s a quick break for supper, before we’re back and ready for the main evening procession at 7pm. We form ranks outside the town hall behind the Jarl Squad, flanked by torch boys with flaming torches, and then march off between the massed guizers to the rear of the procession, playing the Jarl’s Ranks Tune as we go (which this year was the theme from The Magnificent Seven, which produced a little discussion as to what speed we would need to play it to allow us to march to it.  I think we managed to pull it off in the end!). At the foot of the procession we re-form behind the Galley, and await the flare with signals that the guizers should light their torches and begin the procession. 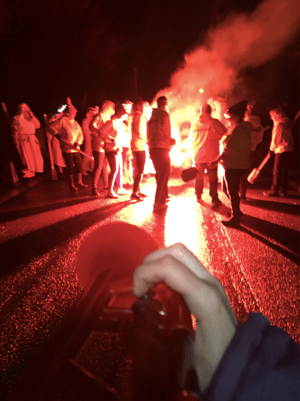 The smell of paraffin, and the heat which comes of the torches when they are lit is one of the defining characteristics of Up Helly Aa for me, and I have to confess to a slight irrational fear that the heat or sparks coming from the torches might somehow damage the pCornet, but it made it through the process without a blemish. It’s not unusual for band members to end up with singed clothing or hair from standing in the midst of the torches, particularly on a windy day - this is brass banding at its most extreme! The procession itself is complicated, and fairly long with thousands of torches winding their way around the streets, before making their way into the local park where the galley will be burnt. The whole thing takes roughly 40 minutes to an hour, although thankfully we do not have to march for all of it - there is a bandstand set up at the edge of the park which we march to before settling in for the rest of the procession. From there we watch the torches wind their way into the park, alternatively playing the Up Helly Aa tunes, and other marches, before the big moment comes. It’s a spectacular sight to behold, and one that really has to be seen to be believed. The whole thing is also broadcast live on the internet, so if you can watch (and listen to us) again via this link (the action starts roughly 15 minutes in).

Music and the burning of the galley are closely connected. As the guizers collect around the galley with their torches held aloft, we are signalled to play ‘The Galley Song’, one of three ‘Up Helly Aa tunes’ performed at every festival (more about those here). The guizers sing along with us, and then the Jarl makes a speech from within his Galley, before climbing out ahead of the burning. Then comes the fanfare, and the moment for the pCornet to shine. A simple five note fanfare, played by the solo cornets signals that it is time for the guizers to thrown their torches into the galley, and off they go! One all the torches are fully ablaze we are signalled again to play The Norseman’s Home, the final of the three Up Helly Aa songs to be played. Fireworks are let off, as the guizers gather round the galley to watch it go up in flames, and we play ‘Blaze Away’ a march by Abe Holzmann, which has become our unoffical Up Helly Aa anthem. This marks the end of the procession, and the start of the all night party to come.  It’s a very poignant moment, and it’s a wonderful privilege to be caught up in the heart of these amazing, community centred festivals. Throughout it all the pCornet has blown freely, sounded great, and, perhaps most importantly for me, stayed warm! I hardly had to empty my condensation key at all, something which can be a huge problem when playing a cold brass instrument in winter outside, and it’s been so light to carry that the marching has seemed that little bit easier. It’s been a hit, and several of my fellow cornets were eyeing it with envy by the end of the night. I’m looking forward to playing it at our next fire festival on at Nesting on February 8th, and at many more to come. Who knows, if you’re watching the live broadcast next year you may well see several more of them in the back row of the cornet section. As brass bands activities go, Up Helly Aa is pretty unique, and I think the pCornet might be the ideal tool for the job!

Why did I invent a trombone slide extender?