Schoolchildren in Australia try out pBuzz

"We have been lucky enough to pioneer the use of pBuzz in Australia and our whole school music program has come alight as a result. One of the best decisions I have ever made... pBuzz rocks!"  - Tony D’Amore, Principal at Oatlands Public School 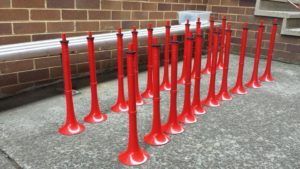 Schoolchildren in Australia have been the first in the country to try out the new pBuzz instrument in music lessons at school.
In October last year, Stage One students at Oatlands Public School were the first in Australia to try out pBuzz, a brand-new pre-brass beginner instrument.
Julie Fews, pBuzz Education Consultant Australia for Warwick Music Group, supported Lucy Lawrence, music teacher at Oatlands, and the students during their first session.
There was lots of excitement as the students were introduced to the pBuzz and produced their first notes and buzzes.  Every student was able to produce a note, and, using the interactive teacher resources, played their first piece by the end of the session.

The pBuzz uses pitch letters, numbers and colours making it easy for all to work out where the notes are.  By the end of their second session the students had learnt to play two different notes and were enjoying playing along to the backing tracks. By the fourth session the students were playing three notes and enjoying call and response musical games. 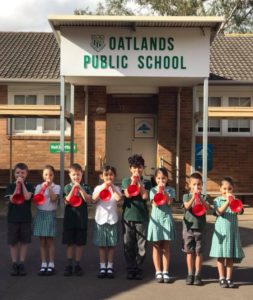 The teaching resources are accessible to all, irrespective of musical knowledge, and support each step of musical development
including videos, backing tracks and musical notation sheets.
Students were full of positive comments about the experience:
"I like the bright colours to help find the notes."
"I enjoy turning my buzz into music sounds."
"It’s easy to play the different notes."
"Buzzing is easy!"
"I like the sound."
As in any school, storage of musical instruments can be an issue. At Oatlands this was resolved by using large storage tubs with a lid so they could be stacked.  As the mouthpieces can be put in the dishwasher, this meant more classes could use the pBuzz during the day.
Studies have shown that learning a musical instrument can benefit children in many areas, including improved literacy, motor skills, wellbeing and social skills. Whilst learning the basics about pitch, timbre and dynamics with pBuzz, children can pick up transferable skills for other musical instruments also. 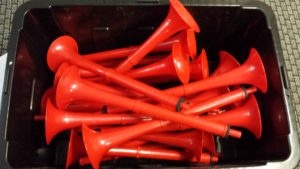 Julie Fews, pBuzz Education Consultant said, "The students at Oatlands are making great progress with their playing and are making good sounds. I really enjoyed hearing them rehearse their new piece and am excited about seeing their first pBuzz performance on Presentation Day.”
After eight sessions the students performed at Presentation Day to over 400 guests, parents and students.  Their performance included a march and two pieces using backing tracks.  One student said, "I liked performing at Presentation Day.  It is like playing in a real band."
Lucy Lawrence, Music Teacher at Oatlands Public School, said, "I have been teaching music in schools for over 30 years, and it is fantastic to finally have a ‘band-type’ instrument that very young children can play. The instant success that the majority of the children have had has been immensely rewarding for them and for me. To build on this, we’re looking forward to launching a school band later this year."
If you would like more information about how the pBuzz program could be used in your school then please contact julie@warwickmusic.com and for orders contact howard@taylormademusic.net