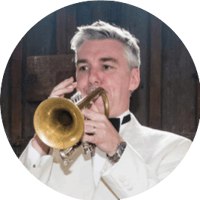 Anthony Thompson has over 21 years’ experience as a freelance trumpeter, with many fine orchestras and as a session musician on over 400 recordings. He has been teaching since he was eighteen and has given masterclasses all over the world.

"I have been happily involved for some time in the development of instruments from Warwick Music Group. Initially my job was to test the first shipment of pTrumpets. I did this by testing quiet short notes on each valve and combination, along with what is called a "chromatic scale" to test the evenness of tone quality. The following video clip shows an example of me doing that test:

When testing the trumpet, the reason I end by playing the chromatic scale is to make sure that some notes are not clearer or louder than others: the pitch may change, but the tone quality should not. This is really important; if the tone quality is inconsistent it makes it much harder for the player to achieve the right sound!

Gradually, I was able to propose changes and refinements to improve the consistency and response of the instrument. The lessons learnt on those earlier pTrumpets were then used to inform further developments of pCornet and the hyTech.

We tried to put a figure on it - the team and I think I may have played 10,000 pTrumpets! This sounds like hard work, of course, but it has also been fascinating and engaging work, both problem solving and having fun to boot:

These instruments and the support of this company can be entrusted to your child, with confidence!