Testing the pBugle; a case study

As part of our testing and evaluation in the pBugle development pathway our friends at Sheffield Music Hub helped us run a morning of workshops at a school in Chapeltown: Coit Primary School. Here we share with you what we wanted to achieve and how we went about it!

We worked with a year 4 class (aged 8-9 years) none of whom had played a brass instrument before and, as we had 12 prototype instruments, we divided them into three groups of 10. Rob Horscroft, trumpeter and Music Leader from the Hub joined us to co-lead the sessions and, as I’m a bass trombone player, provide some inspirational demonstrations!

The sessions were based around swung jazz and a blues in Bb alongside the technical needs of learning to play the trumpet for the first time!

We ran short sessions with a fast pace, which kept the groups engaged. We simply used a generic Bb backing track found on YouTube which we kept running for most of the session after the initial introduction and games.

The learning objectives we wanted to focus on were:

An intro demonstration and question and answer session covered instrument families, leading nicely into the whole question of 'what is sound?' and then how do brass instruments work. Some excellent demonstrations from Rob inspired the pupils about the possibilities of the pBugle and then we were off!

Using the backing track as a guide, an integrated scheme that moves from breathing in through blowing out, pulse and duration via good posture soon lead us to buzzing on the mouthpiece. Although immediate progress was not as instant as with the larger pBuzz mouthpiece, around 70% of pupils were buzzing in the first 2-3 attempts and the reminder caught up on repeat. Call and response work on the mouthpiece created the listening and copy setting we needed to move to instruments and making music.

We then explored sing, buzz, play establishing a platform of pitch for the playing on pBugle to come next. Adding the instruments, with some posture work, we were now into learning a ‘head' pattern, listening and copying and improvisation.

We used a pattern where we all improvised together as “covering fire” and then once the natural leaders had had a go generally speaking we found the group joined in one by one with perhaps a little support and encouragement here and there. This also gave opportunities for pupils to listen and respond to each other, beginning to identify which of the three pitches, high, medium and low their classmates were playing and by implication self-assess their own.

Now we had a really good sound for first players, Rob introduced some basic articulation skills. We brought together a performance where all worked towards to following understanding; how to behave in a performance, the intro (backing track only) played the “Head” (bit like C Jam Blues), played call and response as an ensemble and improvised a solo. 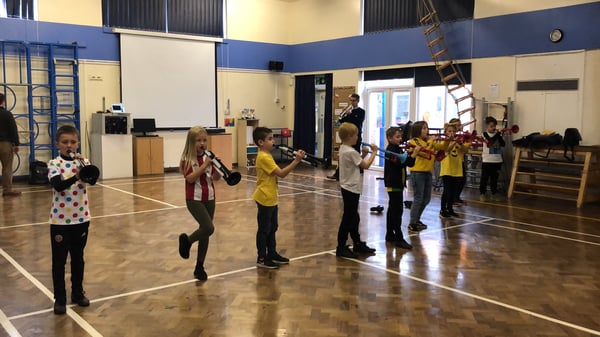 By the end of the workshops we observed the following:

This was a really good piece of testing and evaluation for the pBugle. It was interesting to see the variety of ways children decided to hold the instrument, which we were quite relaxed about as long as their thumbs were towards their face. We were more interested at this stage that a relaxed triangle is formed by the arms, with straightish wrists…the detail of hold can come later.

We did all agree that none of the ways that children held the pBugle would compromise future development or any transfer to trumpet/cornet, also that the pupils all looked comfortable. The teaching assistants, Rob, Jonty (our account manager), the class teachers and I were genuinely surprised by the progress in terms of real trumpet skills, in fact Rob’s response to his leadership team was that 'each group made fabulous progress'.

On a later project a colleague commented that 'without the distraction of valves pupils’ focus can stay on breathing, blowing and sound quality, making progress faster and more authentic'; we certainly witnessed this in our first field test with the wonderful pupils of Coit Primary School. It was a great morning and despite coinciding with Comic Relief Day the school were wonderful hosts and the pupil’s behaviour was excellent!