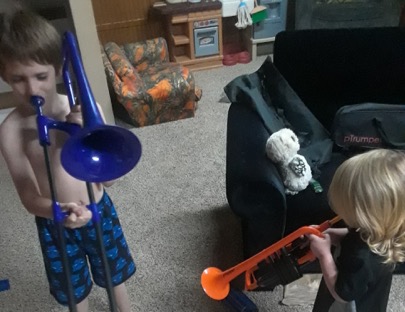 The joy of making music; a pInstrument family affair!

Recently Drew got in touch with us from the US to share his experience of our pInstruments, and how his whole family are experiencing the joy of music! Read his story...

Hello, I'm Drew A. Walker from the United States.  I was raised in Augusta, Kansas a small town close to Wichita, Kansas which is where I now live.  I have a wife and three children; ages six, five and two.

Musically speaking, I was raised and encouraged to pursue my own interests.  Both my parents played the saxophone through their high school years. I have an older brother who also chose saxophone as his instrument. So, when it came time for me to join band in 5th grade, I wanted to be a drum player. Or so I thought! When I tried the drums, the teacher and I realized that I had no rhythm.

Since the teacher also taught my brother, he had me try other instruments like the saxophone.  But it just didn't feel natural. That’s when the teacher had me try blowing on a trombone. I got a note out and he pulled the slide out and I make my first slur on the trombone. That's when I found my instrument a Jupiter 432 Student Model Trombone at ten years of age.

Over the years, I went from first chair to last.  This was because I had stage fright and had troubles playing solos on stage and troubles playing myself in the band crowd. Eventually the stage fright didn't bother me as much and I even joined our local Kansas Music Educators Association (KMEA) jazz band.  At that time, I upgraded my trombone to an artist series trombone the Accent TB 959 DB which has been a great horn for me for the last 13 years. I have played on two other trombones one for Pep Band (King 3B Concert Horn) and another for marching band in college (Silver Yamaha YSL448G). 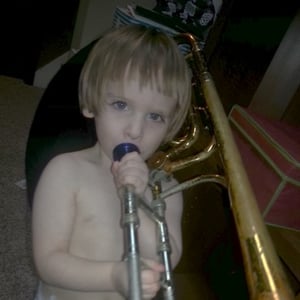 I got out of college and focused on my career and didn’t have much extra time to play my trombone.  Then, the church I was attending added a horn section for the worship band. It was great to be playing again.  My oldest son, then two years old (pictured left), showed interest in my trombone, so I let him hold my old King 3B horn.  He was so proud of himself and so was I!

With three young children, time flies, but I pick up my horn on occasion.  My oldest son, now six, is again showing interest in my trombone and played his first note, a low register Bb. I recalled when a friend mentioned seeing colorful plastic trombones, called the pBone at the music store so I did a bit of research. 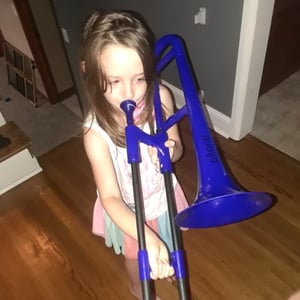 After looking at them, I decided to get the pTrumpet, my thought being that it would introduce the kids to music and they could play and have fun; along with playing a new instrument myself.

My kids really love playing the pTrumpet, I am so proud.  My youngest son, at two years old, is easily playing notes on it and I just ordered and received the pBone Mini (pictured right) so my fun and excitement will only increase!

It is an honor to be a part of a new age of instruments. My children will have a good experience with them and maybe someday soon, one of them will grow into my Accent trombone.

Thank you for inventing such wonderful, colorful, instruments for the next generation. Not only do I enjoy the horns, but my kids do too, which makes me one proud dad 😊.

Top Tips - How to get your child started on their musical journey.

One mum's experience - Your child wants to learn how to play the trumpet where do you start?