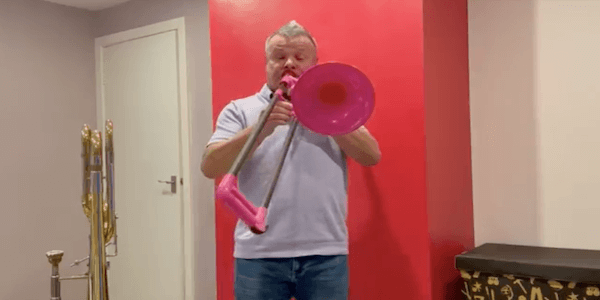 Trombone Beginnings for an Adult Learner

It all started about 6 years ago when, before Christmas, I began to receive emails from Forsyth’s Music Shop in Manchester advertising present suggestions. One was for a plastic trombone!

This suddenly triggered long lost memories of school outings to the Halle Orchestra. We always had the cheapest seats and sometimes they were in the choir stalls right behind the orchestra back row. I always tried to sit behind the brass section because they looked more exciting and were by far the loudest. (I found out in later years that they were always in the pub at half time!)

I also remembered George Chisholm who often played “comedy trombone” on the TV when I was a young lad. He was also a top class jazz musician and must have left more of an impression on me than I thought.

I realised I Just HAD to have a pBone as my Christmas present to myself. After all, at £120, I couldn’t go wrong! The very next night, having bought one on my way home from work, I was checking trombone lessons on YouTube. I soon found the beginners first notes of Bb and F, but of course, it gets more difficult after that. I had some lessons and began to make slow progress. A few months later, I found out that the local brass band, Mereside Brass, met for a beer in one of my local pubs, so began chatting to them. They invited me to their practice evening, but I delayed going till I had some more lessons. Eventually, I summoned up enough courage to join their practice evening and I sat alongside the bass trombonist and tried to follow him as I had learned the instrument in bass clef. I found it all very difficult, but he was a good teacher and in easy, quiet passages, he left me to it!

At the end of 2019 I was invited to attend a concert by Foden’s Band and learnt about the ‘Creating a Buzz’ project. Since then I have joined in the project which has given me great pleasure both in the physical meetings and this last year on our Zoom meetings. The tuition is exceptional, and it has been extremely useful to have our weekly meetings and socialise whilst making music. Playing to help create the music videos is excellent as we now play for a real purpose rather than just solo practice.

The pBone was a perfect present!

If you'd like to receive updates and information from us, then please sign-up to our newsletter below. We won't share your details with any third parties.