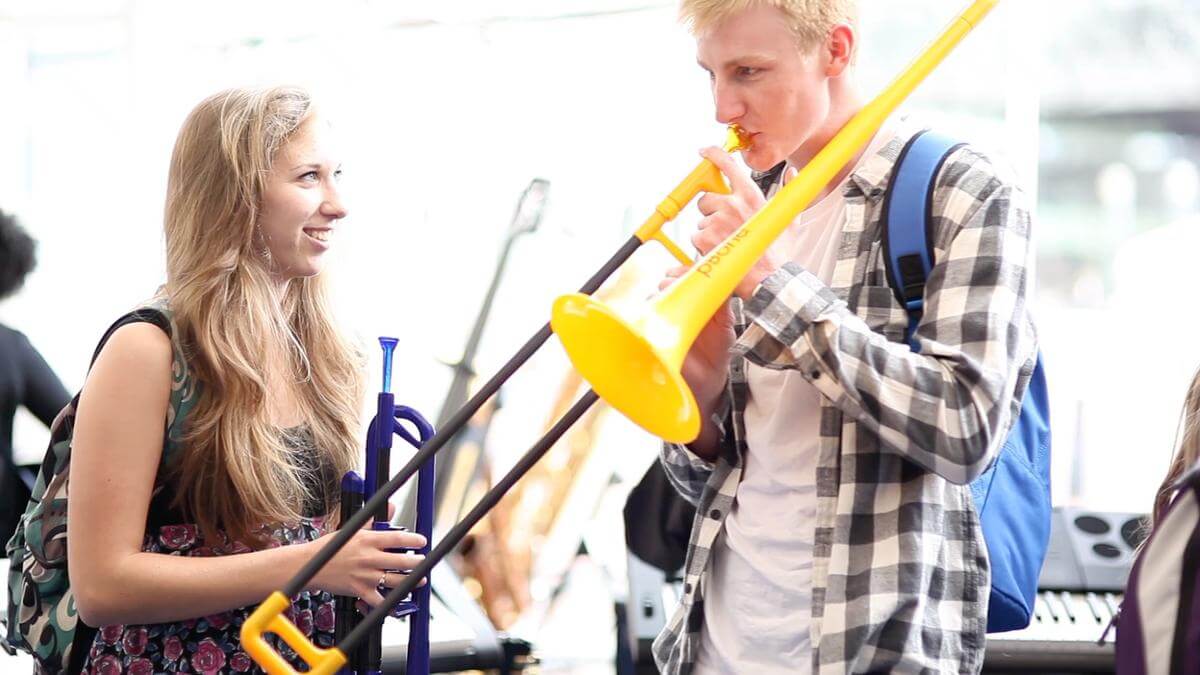 As manufacturers of trumpets and trombones, we are often asked which of the two is the easiest to learn!

This is actually quite a tricky question to answer, as you are comparing two different instruments, however very simply;

The question you should really be asking is - which one is going to be easier for you?! 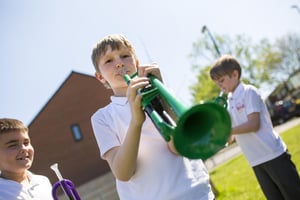 Learning to play any musical instrument brings great personal and educational benefits, you're not very likely to hear someone say they wish they hadn't learned to play.

Brass instruments in particular do take a level of dedication, tenacity, resilience and some good old fashioned hard work.

This is one of the reasons why they are so beneficial for children to learn, not to mention: teamwork, listening skills, motor skills, language development, maths skills, pattern learning, memory, empathy, presenting skills, confidence, broadening horizons etc, etc…

The genuine answer is that both instruments are really easy to play… if you love playing them! So, to help you decide which might be for you, here are a few questions for you to ask yourself...

Which of the two instruments' sound and music do you love the best?

You might want to refer to any great role models in the family, or if your family aren't musical, look further afield. Is there a brass band around the corner or a big band that practices upstairs at the local? Maybe you’ve seen something on the TV, or live in concert, in the town on a summer day, or heard a film score you love - like Star Wars!

Investing your time and energy into learning an instrument is most rewarding when it comes from excitement, love for the music that you are making and hope to make. Music is a social activity and you’ve got to want to be around the people you are making music with, however the great thing about playing is you can let the music do the talking if you don't want to!

You'll probably find you naturally veer towards styles or sounds in particular, from jazz to pop to orchestra, there's a huge variety! For example:

The setting you choose will have an impact on how to get to play; in an orchestral setting there’s lots of waiting around for both instruments but when you get your go you are usually given the chance of greatness. Jazz bands and big bands both have especially satisfying seats for the trumpet and trombone player and pop horn sections abound!

Both instruments get to play in the same breadth of genres, although some specialism might be needed later on in trombone. Generally, you’ll play more tunes in band as a trumpet player and the trombone is more often used in a supportive role.

If you’re in a country with a brass band tradition then learning the cornet as well as the trumpet, which is a common thing, gives the player amazing access to taking the lead and playing tunes, and there are also great parts for the trombone section.

Which instrument is a good 'fit'?

The trombone is long and quite heavy, even if you choose a lightweight plastic instrument like our pBone, the players arm needs to be able to reach all the way to the end of the slide to be able to play all the notes for beginner band. Small trombones in Eb (alto or pBone mini) are available, but these do not fit easily into a traditional band setting so are more appropriate if the potential player is tiny and just HAS to play trombone NOW!

Teeth can be an issue, in that without your front teeth down and stable, playing the trumpet might not be a good idea, as the mouthpiece rests wholly on the lips and any force is transferred to the teeth (the bigger mouthpiece of the trombone also sits on the gum area). Although the trumpet is easier to physically manage than the trombone a smaller player might find the weight an issue so a plastic trumpet or cornet can really help here.

Which musical role suits your personality?

It’s often thought, especially in band circles, that the 'brass section' are a single team, the fun crew friends who hang together. This is usually true to a certain extent but within the brass world trumpet and trombone players are not thought of as sharing the same characteristics (think formula one and world rally championship drivers - they do the same kind of thing, but they are different). From the brass players perspective, in some ways they are worlds apart! 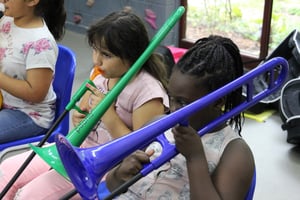 Trumpet players are usually leaders who like the spotlight and might well compete for it. They can function well as individual musicians or part of a team and are often interested in the minutia of the instrument (and can get a bit geeky about it).

Trombone players are pack animals for sure and operate as a team as their default setting. The vagaries of the slide sometimes lead to a slightly more laid back, philosophical view on things. Of course, these are massive generalisations and thousands of exceptions of all kinds surround us in the brass world!

Either way; becoming a brass player will begin a lifetime fascination with the joy of music and the excitement of playing some of the most powerful and dramatic traditional instruments. The brass playing 'family' is large, loyal and supportive and many brass players find life-long friends amongst their fellow players, whichever you choose we wish you the best of luck!

If you'd like to know a little more about either the trumpet or the trombone, check out our How to Play pages.