With two musical parents, Ralph was exposed to music making at a very young age and his parents always hoped that he would want to learn to play an instrument himself one day. His mum, Kate, shares with us how he chose the trombone and started learning how to play…

We felt strongly that it was important for Ralph to choose what he would play and he gravitated towards the trombone when he was just a toddler - I think it was the slide that initially caught his attention! Even as a toddler, Ralph could never resist the trombone and would often be found marching around with a pBone mini pretending to be in a marching band! After choosing an orange pBone for his 6th birthday he wanted to start having lessons.

Ralph’s older sister plays the clarinet in the beginner band at our local music hub and the conductor happens to be a trombone teacher so I approached her about giving Ralph lessons. He has a 30 minute lesson once a fortnight with his friend who is the same age. I was surprised how quickly he learnt to read music and was able to play a tune - on only his second lesson he was playing a tune made up of three notes along to a backing track. Like most kids his age, Ralph is a busy boy with an array of extra-curricular activities he participates in so time is not something we have a lot of! Most weeks we only practice for 5-10 minutes, 2-3 times a week but at the moment whilst he is so young we just want it to be a fun experience for him without too much pressure. His pBone is always set up in his bedroom and he often picks it up to have a play on - just for fun.

I was keen to get Ralph involved in playing with other musicians as early as possible and we are lucky that our local music hub is fantastic at encouraging and supporting new players. They set up a training band which acts as an introduction to ensemble playing for children and prepares them for playing in the beginner wind band which is for grades 1-3. 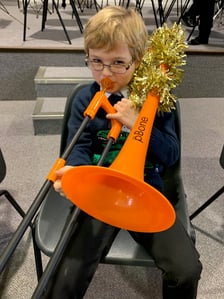 Ralph joined this group after just three lessons! After overcoming his initial nerves at the first rehearsal, he grew in confidence each week and was over the moon to be able to perform with his band in the Christmas Concert.

Playing the trombone really brings out Ralph’s creativity. He enjoys exploring the different sounds he can make and loves to compose his own tunes and perform them to the family, we're enjoying it as much as he is!

For more information that may help you to start your musical journey on the trombone, you may find our how to play trombone page useful.

You may also be interested to read our blog about Gavin, a young man who, like Ralph, started his musical journey with a pBone, and now plays Bass Trombone with the Junior Royal Northern College of Music. Read here...